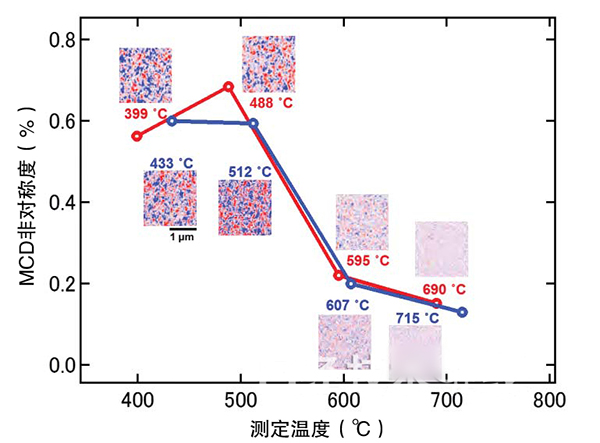 The temperature change of the ferromagnetic surface of the crystal

University of Tokyo, Japan and South Paris University of France announced on May 20, 2016 that the surface of the crystals of the titanium oxide, strontium titanate (SrTiO3), was found to exhibit strong magnetism by short-time heat treatment. Moreover, this ferromagnetic material has a magnetization component in the vertical direction, and can maintain magnetism even at a high temperature of 600Â°C. Therefore, it is expected to implement a high density magnetic device such as a perpendicular magnetization HDD in which a rare metal magnet such as platinum is usually used at a low cost. .

The titanium oxide containing SrTiO3 has no or only a small amount of valence electrons that carry magnetic properties, and does not exhibit strong magnetism such as a magnet. However, studies have shown that after the surface of the crystal of SrTiO3, which is originally an insulator, is slightly devoid of oxygen atoms, a small amount of valence electrons are generated on the surface of the insulator, thereby forming a layer (two-dimensional electron gas) having an ideal surface conductivity.

In this study, the research groups of the University of Tokyo and the University of Paris South predicted that this surface, which has valence electrons and exhibits special conductivity, may exhibit magnetism. Using a laser electron microscope (laser PEEM) apparatus capable of detecting surface magnetism with extremely high sensitivity, they implemented magnetic imaging capable of patterning the surface magnetic state. As a result, it was found that such a surface is uniformly distributed like a magnet at room temperature. Magnetic domains with uniform magnetic moment orientation and nanometer magnitude.

From this, it can be considered that, in the heat treatment, a small amount of valence electrons are generated on the surface of the SrTiO3 crystal due to lack of oxygen, and strong magnetic properties are exhibited. This is a phenomenon that cannot be explained according to the magnetic theory in the past and is expected to have a tremendous impact on the future of magnetic basic research. (Special Contributor: Kudosuke)